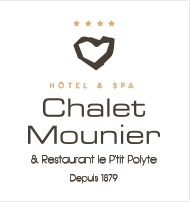 A star shines in Les 2 Alpes

at the restaurant Le P’tit Polyte

The name of the gourmet restaurant at Le Chalet Mounier, "Le P'tit Polyte’’, pays homage to the grandfather of Alban Mounier (the current owner), and is also a nod to the childhood nickname of his father Robert. It corresponds perfectly to the warm welcoming atmosphere of the intimate dining room, furnished in a typical mountain style with light wooden furniture, red velvets, elegant objects and full of special memories. As for the food, Le P'tit Polyte rises to the heights of the Les 2 Alpes peaks, and invites you to set out on a gourmet adventure unlike any other. Our chef serves an inventive, ambitious cuisine made from fresh produce, some local, some from further afield, achieving a perfect blend of flavours.

Open Tuesday to Saturday evenings from 7.45 to 9 pm - Booking recommended.

The duo at the head of the gourmet restaurant is passionate about gastronomy.

Emilie PARIS pastry chef has already proved herself at Villa Florentine (1 Michelin star) and in the three-star restaurant "L'auberge du vieux puits", currently second at the selection of the World Pastry Cup, she promises beautiful discoveries at the "P'tit Polyte" table.

Tanguy RATTIER of Nantes origin, has crossed France to train in the kitchens of great chefs like Michel de Matteis, Christian Le Squer or Jean-Yves Guého, finalist of the prestigious competition of the MOF in 2016, second for many years in the starred restaurant "Atlantis" then executive chef in the same restaurant, here he arrived with his aspirations from the Atlantic that he marries wonderfully with the local products: Saint-Pierre in ceviche, radish, lemon and fir gel or still Madame Fraysse's duck breast, smoked beetroot and carcass juice ...

"Le P'tit Polyte" with its highest perched star of Isère has not finished surprising you.